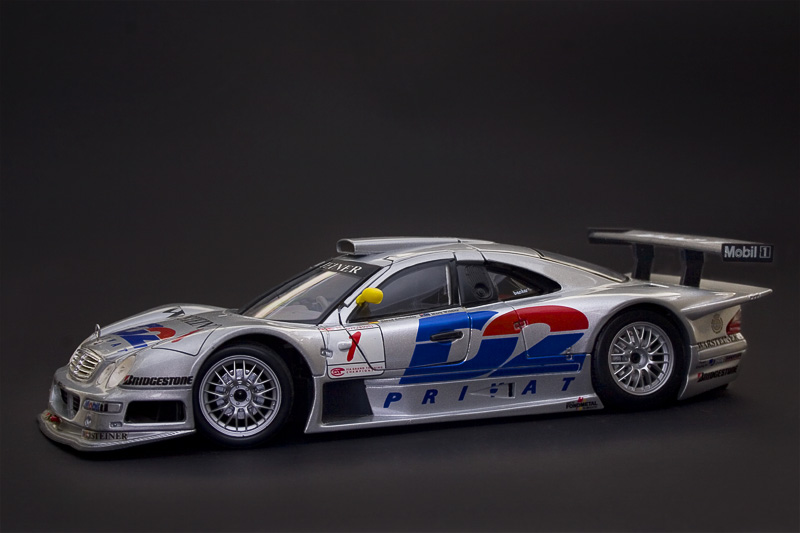 About the car:
When the DTM series ended in 1996, Mercedes-Benz wanted to find a replacement top-flight racing series. Enter the FIA GT Championship in which Mercedes-Benz campaigned their very successful and infamous CLK GTR.

Successful:
It won everything around it. AMG-Mercedes won both the Driver and Team Championships in 1997 and 1998

Infamous:
We were very lucky growing up, we had Eurosport on satellite during the nineties. I was watching Le Mans live in 1999 when this happened:

That weekend, two CLK GTRs (technically they were CLK LMs, essentially the same car with a V8 instead of a V12) took flight – both spectacular. Unfortunately you can only win at Le Mans by going fast and going the distance… being spectacular will only win talent contests.

About the photo:
This is a shot of a 1:18 scale model of the GTR – I got it back in 1998 and it’s been sitting in a box for the last ten years or so. I found it a few weeks ago and thought it would be something different to try and capture.

The lighting was a bit of a nightmare, but it worked out ok. I had a black card under the model, a reflector above. I managed to bounce the on camera flash up onto the reflector and back down onto the car with a bit of trial and error. Here’s a shot of the setup, it’s not great, but it did the job: